Yaaradi Nee Mohini: Will Mutharasan And Rudra Get Trapped By The Occultist?

The occultist hired by Swetha realises that someone is performing a pooja to counter his power. 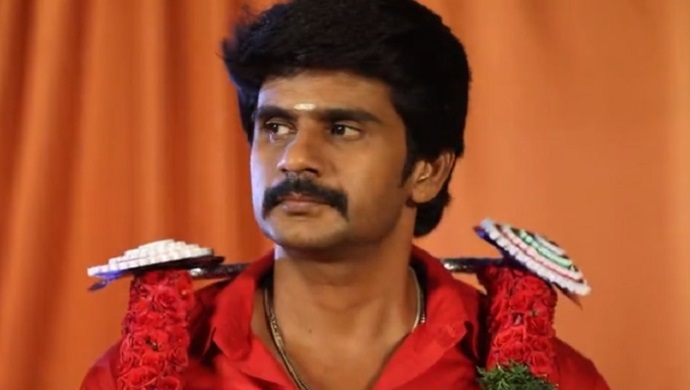 Today’s episode of Yaaradi Nee Mohini promises to be an intriguing one for sure. Vennila (played by Nakshatra) feels that she has failed after two goons purposely collide with her to ruin her efforts as she carries a pot of milk to the pond. The pot falls on the ground spilling milk all over. Vennila cries helplessly thinking that she wouldn’t be able to save Rudra and Mutharasan. But she isn’t aware that a snake sent by the Goddess has already reached the occultist’s camp to stop Swetha and Mutharsan’s marriage.

But will the five-headed snake with divine powers be able to stop the occultist from succeeding in his mission? The occultist has acquired a mangalsutra for Swetha that will make her invincible as far as her relationship with Mutharasan is concerned. Will Mutharasan, who already gets hypnotised by the occultist, get married to Swetha? Will Rudra, who treats Vennila as her mother, continue to love her?

For those who missed the last episode, the occultist hired by Swetha realises that someone is performing a Puja to counter his power. He tells Swetha that the pooja has to be interrupted else his plans will go kaput.

Swetha’s goons purposely collide with Vennila when she walks towards the pond with a pot of milk to complete the rituals of the puja. The pot falls from Vennila’s hands and the milk spills all over. A divine five-headed snake takes a portion of milk left in the pot and heads for the occultist’s camp to stop the proceedings.

The snake showers milk on Rudra who gets held by the occultist. He stops the snake from spilling milk on Mutharasan by creating a boundary. Will he be able to overpower the snake and trap Mutharsan and Rudra?

What do you think will happen in today’s episode? Let us know your views in the comments below!

To watch more Tamil soaps, check out Sathya streaming only on ZEE5.