Yaaradi Nee Mohini: Will Swetha Bring Saree And Lamp From The Goddess’ Temple In Forest?

Though we know Vennila is God's child, we aren't unaware of Swetha's dirty tactics. She has stooped lower than one would have imagined. 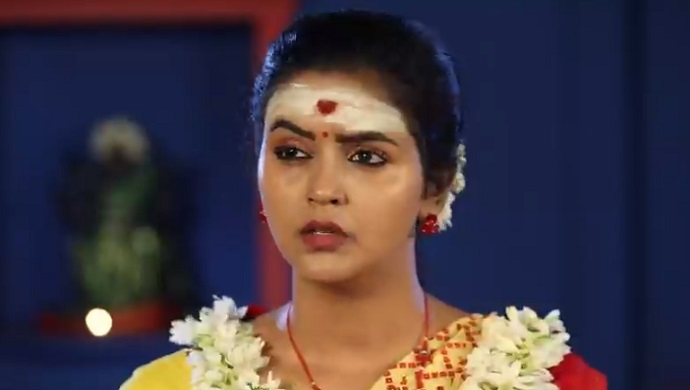 In yesterday’s episode of Yaaradi Nee Mohini, we saw how Swetha insisted on performing the traditional puja on behalf of the village to please the rain gods. Though the villagers wanted Vennila to represent Miutharasan’s family, they allowed Swetha also to participate. However, they put one condition, and it is this -both Vennila and Swetha have to visit the forest at night holding a lamp. Whoever returns first with the Goddess’ saree and the light, will be honoured with the rights to perform the puja.

Swetha and Vennila start their journey from the village temple to the abode of the Goddess in the forest. Swetha has the support of her friends and Maruthu while Vennila has the entire village behind her. Though we know Vennila is God’s child, we aren’t unaware of Swetha’s dirty tactics. She has stooped lower than one would have imagined. Swetha has killed Kulanagini only because she supported Vennila and helped Annamalai in his endeavour to free Mutharasan from the effects of black magic.

So, what will she do now to stop Vennila from returning to the temple with the saree and the lamp? Or will there be a divine intervention to make Vennila the undisputed winner?

For the unversed, Yaaradi Nee Mohini is a supernatural thriller starring Shreekumar (as Mutharasan), Nakshatra (as Vennila), Chaitra Reddy (as Swetha) and Murali Krish (as Annamalai) in pivotal roles. Mutharasan hails from a family of the Zameendars and is the richest landlord of his village. People look up to him and have regards for him and his family. Vennila is his niece, who wishes to marry him. She looks after his daughter Rudra (from his first wife, Chitra). Chitra had an untimely death. Now, she roams as a spirit to take care of her house and protect it from evils. Follow Yaaradi Nee Mohini on ZEE5 and for more entertainment, watch Poove Poochoodava, the story of a couple that is madly in love.