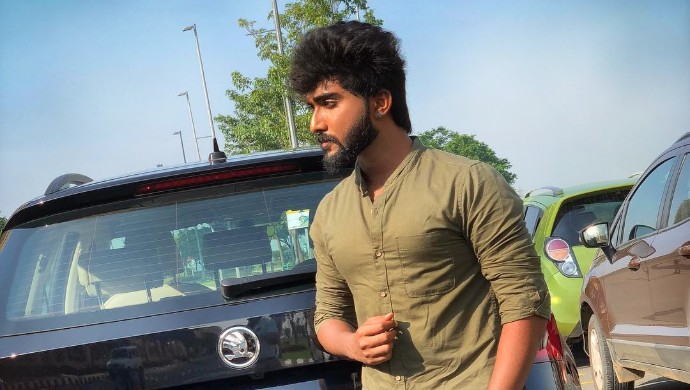 Vishnu Unnikrishnan is a name that has been familiar to the masses through the various dubsmash videos that he has been uploading. This fame of the actor is not just restricted to the male audience but also to a big number of female audiences. In the ZEE5 Kandukondain Kandukondain, we see this actor playing the part of Vikram Surya, alongside actors like Seema and Krishnapriya. Now, this dubsmasher turned actor has been showcasing his acting skills on the show. This talented actor had proved his potential while he used to make dubsmash videos. As he was pretty well known for mimicking Tamil actor Surya’s mannerisms, very aptly.

So while looking for Vishnu’s dubsmash videos I stumbled upon some of his pics on Instagram, which essentially prove that Vishnu is indeed one of the most handsome hunks in the Tamil Tv industry. We are sure you will crush on the actor after seeing these pics…

The attitude in the posture of Vishnu says it all about this Southern hunk .

Hello everyone . Yet another year begun , an year older and with the bunch of caring people who I love the most. Thank you so much for all your warm love and wishes . This birthday was indeed very special for me . Got numerous calls , gifts and messages also my inbox is flooded with all the love and good prayers .I am extremely humbled . I’m really sorry if I didn’t reply or respond to your calls / messages yet , I was busy doing what I love the most – shooting for new serial Kandukonden Kandukonden on Zee tamil, so indeed it was really a productive bday . Thank you so much once again and I’ll promise to pay back this gratitude by working hard and keeping you all entertained . Also our serial will be telecasting on by next Month Start and the promo will be out soon . Please stay with me throughout this journey and keep supporting like you always do . Blessed and much love 💕 #birthday #happybirthday #birthday2019 #meninblack #casual

Decked in a black outfit this star definitely nails the essence of the term pristine in black.

Thanks for this SuperCool Shoes @aao_and_wow . Check them out if you wanna get some cool stuff for yourself 🔥 . . #nikeshoes #nike #shoot #cool #beardgang #chennai #bearded #instaweb #insta #instalikes #mallu #kerala #lifestyle #instagood #model #like #photooftheday #postoftheday #instaaddict #instapic

After all that attitude and charm come the time to be thoughtful about self and that is what the actor aims at probably!

So which among these is your favourite picture of the actor? Share your thoughts in the section below.

Watch 8 Thottakal, The Struggle Of A Man To Make Peace With His Present And The Past

Dog, Parrot, Lamb – These Cute Pics By Jyothi Of Nachiyarpuram Are Proof She Loves Animals

Shabana Shajahan's Post Will Make You Believe In Yourself