Sathya, Shwetha and Abhirami were among the telly stars who made it to this list. 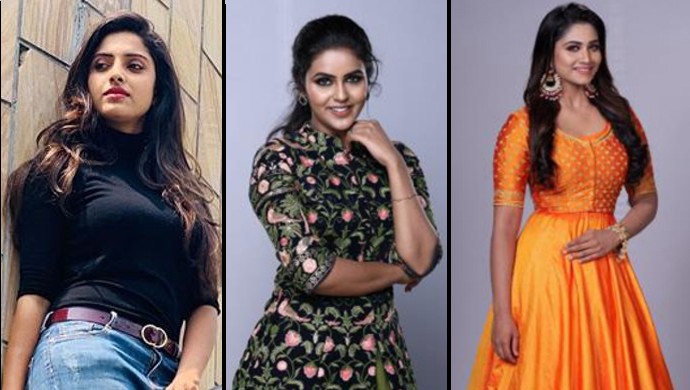 We know that the heroines and villis from our favourite Zee Tamil shows are not only amazing actresses, but also drop dead gorgeous and this recently polled survey confirmed it. Chennai Times put out a list of 20 most desirable women on TV for 2019 and three favourites from Zee Tamil polled in the top 20. Ayesha, the lead actress in Sathya, Chaithra Reddy who plays Shwetha in Yaaradi Nee Mohini and Shivani Narayanan, who plays twin sisters Anuradha and Abhirami in Rettai Roja have all made it to this list.

Passionate souls burn with a fire few can handle, yet none can resist ✌🏻 . . . @zeecineawardstamil @zeetamizh @zee5tamil

Ayesha who plays the titular role of Sathya in the prime time series Sathya is one of the most beloved characters on television. Unlike the usual line-up of female lead roles that caters to patriarchy, Ayesha plays a tomboy called Sathya who runs her father’s garage after his demise. On screen, she is a street-fighter and motorcycle rider who jumps off rooftops. Off-screen, the pixie-cut wig comes off and the diva is possibly one of the most glamourous actresses with a sizeable fan following.

Chaitra Reddy who plays villi Swetha on Yaaradi Nee Mohini is one of the most popular characters in negative roles in Tamil TV industry. Besides being far too gorgeous to be a villain, the actress also plays her part to perfection. She is best friends with Nakshathra who plays the female lead on the same show and two of them are quite active on Tik Tok together.

Shivani Narayanan a.k.a Anu and Abhirami on Rettai Roja

Shivani Narayanan plays twins Anuradha and Abhirami on Rettai Roja. We are not surprised that she made it to this list because not only does she look sophisticated and hot as the modern Abhirami, she also gets to look like a complete village belle in the colour pavadai-daavani that her twin character Anuradha wears.

For more such drama and entertainment, watch Rajamagal, now streaming on ZEE5.

Chaitra Reddy, Shivani Narayan: TV Stars Show You How You Can Embrace Singlehood!